Morgan Freeman does not want his legacy tarnished by these accusations.

Despite having literally played God in a movie, Morgan Freeman has become the latest person in Hollywood to be marred by scandal, in his case, a series of allegations accusing him of sexually harassing women on movie sets.

One incident involved Freeman trying to lift a woman’s skirt and asking her if she was wearing panties. Another involved Freeman being critical of the clothes that the female cast members were wearing while on set. Further footage of Freeman harassing Entertainment Tonight reporters was also released shortly after.

Freeman has already offered a statement apologizing for his behavior, saying that, “Anyone who knows me or has worked with me knows I am not someone who would intentionally offend or knowingly make anyone feel uneasy. Adding, “I apologize to anyone who felt uncomfortable or disrespected — that was never my intent.”

However, now that Freeman has realized these allegations have yet to simply disappear, he’s offered a second statement, pushing back against the implication that these incidents should disqualify him from his achievements.

“I am devastated that 80 years of my life is at risk of being undermined, in the blink of an eye, by Thursday’s media reports,” Freeman writes. “All victims of assault and harassment deserve to be heard. And we need to listen to them. But it is not right to equate horrific incidents of sexual assault with misplaced compliments or humor.”

He goes on to state that what he was doing was only jokes, and that he never meant to make anyone feel uncomfortable.

“But I also want to be clear: I did not create unsafe work environments. I did not assault women. I did not offer employment or advancement in exchange for sex. Any suggestion that I did so is completely false,” Freeman concludes. 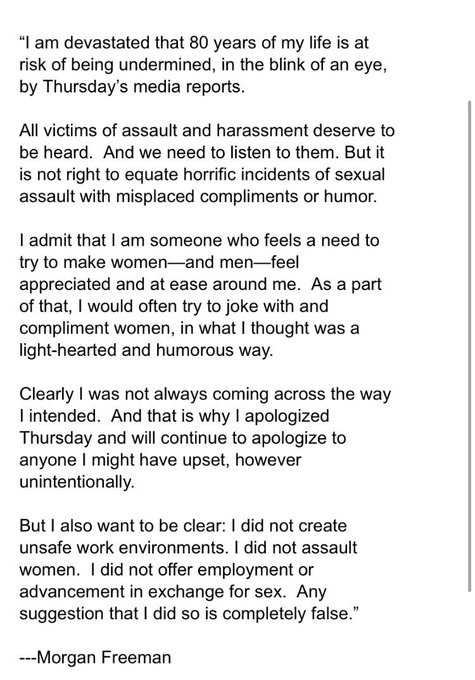