Cristiano Ronaldo is a Juventus player.

The Real Madrid legend moved to Juventus in a 100 million Euro deal that has stunned the entire footballing world.

But what number is he going to wear?

It has been revealed that he will sport the Number 7 jersey which has been a number he’s worn at all the major clubs he’s been in.

Juan Cuadrado was the player who donned the Number 7 jersey initially, but he graciously vacated the shirt and gave it to the Portuguese striker.

Ronaldo was the number 7 at Manchester United taking the iconic number from David Beckham and excelling in it, the same with his Real Madrid career where he again, donned the number 7 jersey made popular by Raul.

He has also excelled and in fact, his brand name ‘CR7’ almost mandates that this is the number he is to wear.

In an Instagram post, Cuadrado said: “It is better to give than to receive! Blessings Cristiano in this new adventure.”

It is possible that this gesture is just a cosmetic one, however, as it was likely that Ronaldo would have been given the jersey number whether graciously or not as his high profile means he would most likely be treated a little differently. 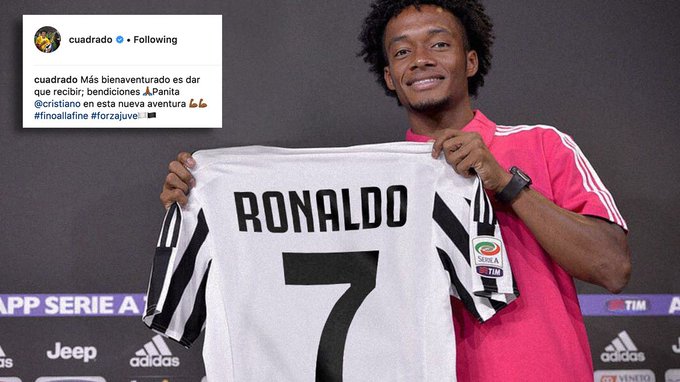 “It is better to give than to receive.”

What a welcome to @Cristiano from @Cuadrado!

While most of the Juventus fanbase is excited by the signing, some people, especially Fiat workers in Melfi, have deemed this transfer extravagant.

In response to this, the workers are currently on strike as they feel that the purchase of Ronaldo shows a lack of empathy for their plight.

“It is unacceptable that while FCA and CNHI workers continue to make huge economic sacrifices, the company then spends hundreds of millions of euros on the purchase of a player,” a statement from the USB (Unione Sindicale di Base) read.